Discover the history & culture of the Big Island of Hawaii on this tour, where you'll learn about ancient Royal families, traditional Hawaiian laws, & the European arrival, plus visit a coffee and bee farm, with lunch included. 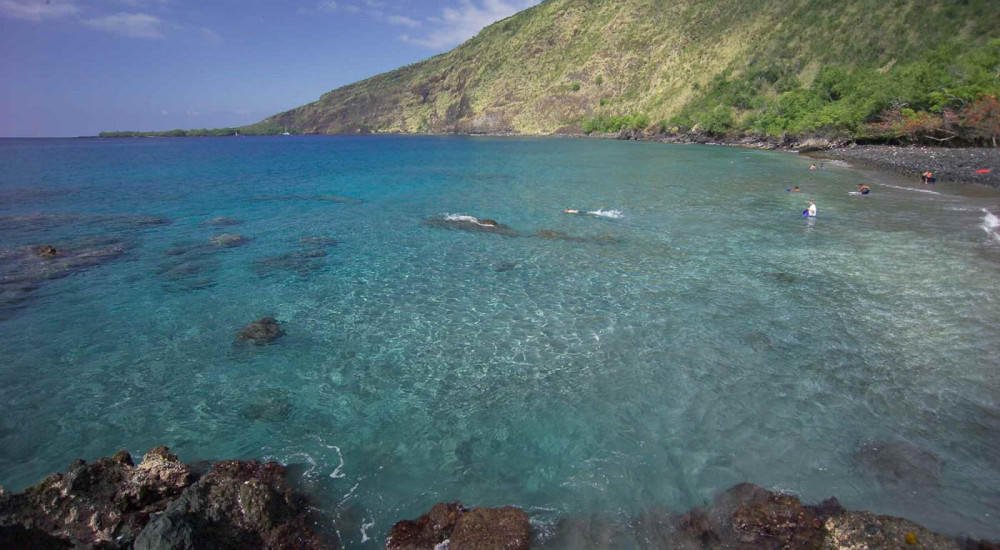 Delve into the fascinating history and vibrant culture of the Big Island of Hawaii. Tour ancient Hawaiian sites along the coast, visit early churches and a royal palace and make stops at a honey farm and coffee orchard to taste some of the island’s locally made treats.

Your tour begins at Kaloko-Honokohau National Historical Park, where abundant sea life has attracted settlements for centuries. Learn about the fantastic handmade fishponds and seawalls along the beach, and walk along a trail to sacred temples and petroglyphs. You might even spot a sea turtle or monk seal on the salt and pepper sands.

Drive through downtown Kona, passing by the former royal vacation home at Hulihee Palace and Mokuaikaua Church, the oldest Christian church in the Hawaiian Islands. Then, ride along the rugged volcanic coastline to Big Island Bees, which has been producing organic honey since 1972. After a presentation from a beekeeper, get a close-up look at a hive and sample some of their sweet island nectar.

Hear about Captain James Cook’s arrival at Kealakekua Bay (where he also met his end), and enjoy a fresh picnic lunch at the lookout. Then set out for a narrated walking tour at Puuhonua o Honaunau National Historical Park to learn how Hawaiians who had broken an ancient kapu (law) could flee to this seaside location to be absolved by a priest.

Finally, make your way to a Kona coffee farm. Walk through the orchards and learn about the harvesting and milling process, and sample a warm cup of Kona-grown java before head back for the day.

How much hiking do we do?

We will have a couple of easy hikes over a short distance on this tour. The total hike distance is about a mile.

Will we get to taste Kona Coffee and honey?

Yes, there will be free sample tasting at the Kona coffee farm and Big Island Bees

Can cruise ship visitors go on this tour?

Yes, we can pick up from Kailua-Kona pier and return by 3 pm.

What should I wear?

Are your tours child/senior/disabled friendly?

Yes, they are. However, we don’t recommend our tours for very young children (i.e. < 5yrs old) or those with serious mobility ailments. Our tour vehicles are not equipped with a wheelchair lift, but do have plenty of storage space for a collapsible wheelchair and have low steps making them easy to board.

Will the tour be cancelled if it rains?

Our tours will operate in wet weather. Rain is common in certain areas of the island which is why we always provide rain gear for your convenience. We only cancel when the weather makes transportation hazardous and/or there are road closures.

A credit card or debit card is required at the time of booking. Payment will be processed at booking to reserve your spot on the tours. If you would like to make arrangements for cash payment to be collected on the day of the tour, please make a note in your reservation and we will be happy to accommodate you.

Please be advised that we do require a minimum number of four participants on all of our tours. Although your booking has been created, the tour can be cancelled due to low participation. We will attempt to contact you and give an advanced warning of any possible tour changes or cancellations. All tours cancelled due to low participation are eligible for a full refund at the time of cancellation. In the event a tour must be cancelled, we are happy to offer different times or dates that will confirm the excursion will take place.

Full price will be charged for cancellations and “no shows” unless we receive prior notice as follows: One to five guests – 24 hours; Six or more guests – 48 hours; Private charters – 72 hours.

Red molten lava and volcanic activity changes constantly and cannot be guaranteed. Comfortable walking shoes are required. We’re happy to accommodate special dietary needs and restrictions, including children’s meals, with advance notice. The itinerary may change, and refunds will not be given for closures and itinerary changes outside of our control. Tour runs rain or shine.