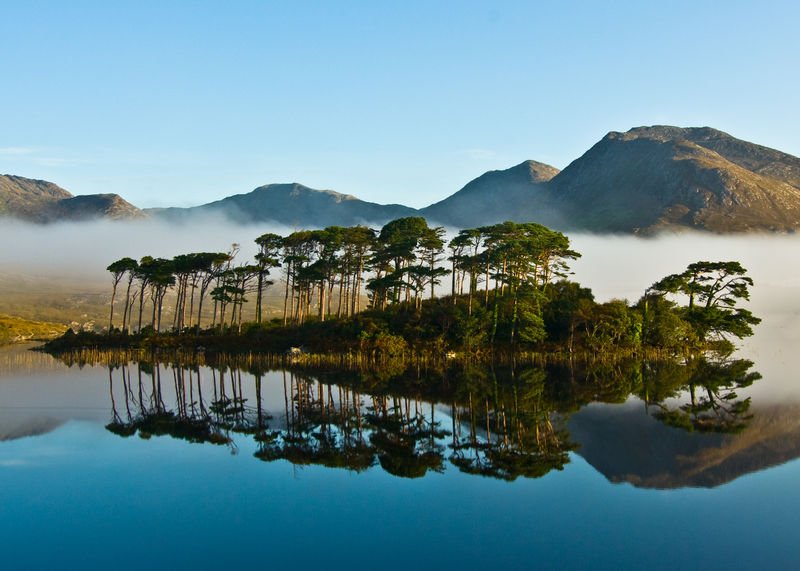 An enchanting day tour to the glorious West of Ireland where John Ford filmed "The Quiet Man". We arrive through Galway, also known as the City of the Tribes, see Kylemore Abbey and explore Connemara which means "inlets of the sea".

Check-in is 20 minutes prior to Train Departure Time.

Check-in is located close to the Customer Service Desk at Heuston Station where our Railtours Ireland representative will be waiting for you in their bright yellow jacket!

Itinerary for Departures on Tuesday and Friday

Check-in for 07:35 departure from Dublin Heuston Station opened in 1844 as the headquarters of the Great Southern & Western Railway and is now the official principal station of Iarnród Éireann, Ireland’s national railway company.

As your train departs, we travel in a south-westerly direction, through Dublin's western suburbs and then through the lush fertile countryside of Co. Kildare. Our journey takes us through the Curragh which is famous for its racecourse, home of the Irish Derby, and there are many stud farms in the vicinity. Your route takes you into the midlands and the Bog of Allen, vast tracts of peat-land. We pass through the County Town of Tullamore and then to Clara across the gentle farmlands of north Offaly. The train crosses the River Shannon, which marks a historic border between the province of Leinster and Connacht – the historic province of the West of Ireland. You are now heading due west, surrounded by peat bog on both sides of the line. On the last few kilometers before Galway, you will get your first glimpse of Galway Bay.

Our tour today departs from right outside Galway Railway Station named in 1966 after one of the leaders of the 1916 Easter Rising – Eamon Ceannt. We go around Eyre Square ( John F Kennedy Park ) in the center of Galway City before crossing the River Corrib on the Salmon Leap Bridge, passing University College Galway, through the Galway suburbs and then striking out in a north-westerly direction towards the savagely beautiful Connemara. You might catch a glimpse of the mighty Lough Corrib ( Ireland’s second-largest lake ) on our right-hand side. We soon pass through the village of Moycullen and enter Ireland’s Gaeltacht or Irish speaking area. We continue through the lovely village of Oughterard and start smelling the aroma of Ireland – the peat or turf fires and their unique blue smoke which has a wonderful fragrance! We now emerge into the spectacular scenery of Connemara – mountains, lakes - all there to behold!

In the summer of 1951 the Irish American Hollywood film director, John Ford (his real name was John O’ Feeney), fulfilled his lifetime ambition to film 'The Quiet Man’ using the wonderful backdrop of Connemara as his Mainstage. We now visit one of the locations – Leam Bridge, better known now as The Quiet Man Bridge, where Barry Fitzgerald and John Wayne stopped on their way from Castletown railway station to the mythical Innisfree!

From here, you will start to notice the remains of the much-missed Galway to Clifden railway line which ran parallel to our route. This spectacular branch line was closed in 1935.

Shortly after we visit Leam Bridge, we stop at Peacockes hotel and Tavern at Maam Cross, the Crossroads of Connemara. Here we have a comfort stop with time for perhaps an Irish Coffee and/or some shopping. You might have time for a quick look at the former Maam Cross railway station, which is now the location of a very exciting restoration project aiming to restore the station and a section of the old Galway to Clifden railway line.

We then proceed towards the hamlet of Maam and make our way down the Maam Valley between the majestic Twelve Bens and the Maam Turk mountains! This area is known as Joyce Country and is where anyone in the world called Joyce has their roots! We pause next at the pretty little village of Leenane, magnificently situated at the head of Killary Harbour – Ireland’s only true fjord, nine miles from the ocean. We continue on through fabulous scenery to stunning Kylemore Abbey, built by Mitchell Henry as a home for his Bride in the mid-nineteenth century. It is now a Benedictine Convent and is open to visitors. We stop here for almost two hours with time for lunch (not included) and explore – including the beautiful Victorian Walled Garden, and the Gothic Church.

We continue through the Kylemore Pass and the village of Letterfrack and start skirting Bays and inlets of the sea/ocean which adds to Connemara’s attractiveness! Soon we are back on the Wild Atlantic Way and making our way around Streamstown Bay before climbing steeply up the really spectacular Sky Road, where we will have a truly satisfying photo stop with phenomenal views of the wild Atlantic Ocean! We then descend into the lovely town of Clifden, 'Connemara's Capital', for a comfort stop where there will be time for some shopping – or even a pint!

We leave Clifden and start making our way back to Galway through more breathtaking scenery with a comfort stop at Maam Cross if required. We arrive back in Galway, the City of the Tribes, by 18:0pm.

We will arrive back at Dublin Heuston at 21:45hrs.

Can I leave the tour before it returns to Dublin?

Yes. For example, if you wish to leave one of our tours in Galway, you are free to do so. However, please advise your Railtours host on the day, otherwise, they will be worried about you! Please note that there is no refund for any unused portions of the tour.

If you wish to extend your tour and spend an overnight in Cork, Killarney, Galway, and Belfast we can arrange accommodation, subject to availability.

Do you use first class on the train?

We do not use first class on the train as first-class rail transport is extremely limited and available only on certain trains on three routes in Ireland. For operational reasons, all Railtours Ireland customers sit together in a specially reserved car or portion of a car with their host.

I want to go on one of your extended tours – what about luggage?

There are luggage facilities onboard trains & coaches and we try to keep luggage transfers between the trains and coaches to a minimum.

It is recommended that large excess amounts of luggage be stored, perhaps, at your Dublin hotel for the duration of your rail tour. We advise that you only bring what you are comfortable lifting on/off trains & coaches. However, there is no luggage restriction.

How do I get to Ireland?

Getting to Ireland is easy. While we do not offer flights, we recommend Aer Lingus for the widest selection of routes and best value from North America, the UK, Europe, and Australia.

Remember, if you are returning to the USA from Ireland you can take advantage of pre-clearance, which is unique to Ireland, and arrive home as a domestic passenger avoiding the queues at immigration.

You can also take the ferry from The United Kingdom to Ireland.

What sort of people travel on your tours?

Railtours Ireland First Class is what’s known in the travel/tourism industry as a FIT tour product. This means that it attracts “Free Independent Travellers” of all ages and nationalities. What these travelers have in common is a desire to have a unique touring experience in Ireland, one in which they are free to explore Ireland's towns, cities, countryside and attractions at their own pace, while also availing of a wonderfully constructed itinerary and knowledgeable hosts.

Our tours also offer a comfortable and eco-conscious way to explore the island of Ireland without having to drive.

What language are your tours conducted in?

Our tours are conducted in English only. However, we can provide detailed itineraries in all major European languages if we are informed of your requirements in advance. Also, at key visitor attractions in Ireland, multiple language literature is generally available.

Are your tours wheelchair friendly?

As long as you have some mobility, our tours would be suitable for you.

The trains are wheelchair friendly in Ireland however, most coaches are not wheelchair accessible so you would be required to get on and off the coach unaided by Railtours Ireland staff.

If you need extra walking assistance, you may bring a light-weight foldable wheelchair that can be stowed in the luggage compartment. It is with regret that we cannot accommodate mobility scooters on our tours.

Please ensure that you advise us when booking a tour, that you will be using a wheelchair or other medical equipment so that we can make the necessary arrangements in the train stations ahead of time.

On any tour to Belfast or the Giant’s Causeway and Game of Thrones, you will be leaving the Republic of Ireland and entering the United Kingdom and Northern Ireland.

Please ensure that your visa requirements are in order, and it is essential that you carry your passport.

We are dedicated to providing a professional and personalized service. It is our intention to operate all tours as advertised. However, due to operational reasons, it may, on occasion, be necessary to alter certain itineraries. We cannot be held liable in the event of an attraction being closed.

We cannot be held responsible for customers not having the correct visa documentation to enter Ireland or Northern Ireland.

We do reserves the right to cancel tours if industrial or other action affects any of the components which make up our tour or if there is insufficient demand. However, all tours that include accommodation are guaranteed departures (unless under very exceptional circumstances).

Please note that all guests on extended tours (all tours that include accommodation) are taken to and from Inis Mór by ferry.

We cannot be held responsible for any damage, loss, accident, delay, irregularity, injury to person or property whatsoever or howsoever caused arising out of or in connection with excursion, tour or transfer. Passengers travel at their own risk and our liability for any claim whatsoever is limited only to the price of the tour.

All refunds are subject to a 10% administration charge. We reserve the right to refuse admission to any tour and to terminate a tour if circumstances demand.